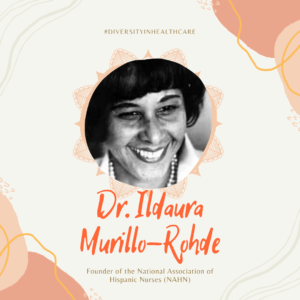 Wednesday’s Doodle features an artwork inspired by Latin American textiles and is dedicated to the memory of Dr. Ildaura Murillo-Rohde, who died in Panama in 2010. The piece features the orchid, which Murillo-Rohde often wore to nursing conferences. Lora recently became a nurse and said Murillo-Rohde’s work had influenced her.

Dr. Ildaura Murillo-Rohde was born in Panama. She immigrated to the United States in 1945. She earned her Bachelor’s degree in education from Columbia University and her Masters and Doctorate from New York University. She is a pioneer in the promotion of Latino nurses. Her dedication to advancing the profession earned her the honor of being named a Living Legend by the American Academy of Nursing.

As a psychiatric nurse, Dr. Ildaura Murillo-Rohde worked in various healthcare fields and helped to create the National Association of Hispanic Nurses (NAHN), which seeks to improve healthcare for the Hispanic community. She was the first president of NAHN and promoted cultural awareness and diversity as a psychiatric nurse. To honor her legacy, Google has created a Doodle celebrating Dr. Murillo-Rohde, illustrated by Loris Lora, a Latinx illustrator living in Los Angeles.

A pioneering Hispanic nurse, Dr. Ildaura Murillo-Rohde, has been honored with a Google Doodle. Artist Loris Lora created the illustration of the famous nurse in a hospital. Murillo-Rohde is a nurse, educator, and organizational administrator who founded the National Association of Hispanic Nurses. She died in 2010, and the Doodle honors her legacy.

Dedicated to improving the health care of underrepresented groups, Dr. Ildaura Murillo-Rohde has devoted her career to equipping other Hispanic nurses with the knowledge and skills to improve patient care. Her work has inspired others to work towards this goal. She was born in Panama but moved to the United States when she was 21. She realized that the language barrier between nurses and patients could prevent people from receiving quality care.

She is best known for her contributions to psychiatric nursing. She founded the first psychiatric division in Elmhurst General Hospital, NY. She also worked as the dean of nursing at the State University of New York. She also served as a consultant to the Guatemalan government, where she established a pilot program to train local healthcare personnel to provide psychiatric care.

Born in Panama, Dr. Ildaura Murillo-Rohde immigrated to the United States in 1945. She began her career as a nurse in San Antonio, Texas, and later went on to complete her Bachelor’s and Master’s degrees in nursing. She later became a professor at Columbia University and studied cultural awareness in nursing. She passed away in Panama in 2010.

An American Academy of Nursing member, Dr. Ildaura Murillo-Rohde, advocated equal opportunity for Latino nurses. She was an active member of the American Nurses Association in the 1970s and led the effort to establish a Spanish-speaking nurse’s caucus. She was the first Hispanic nurse to earn a Ph.D.

She was born in Panama and spent most of her childhood there. She immigrated to the United States in 1945 and worked as an administrator and professor at different institutions. Her contributions to the Hispanic community were extensive, and she was named a Living Legend of the American Institute of Nursing. The American Institute of Nursing named Dr. Murillo-Rohde a Living Legend in honor of her gifts.

As the Founder of NAHN, Dr. Ildaura Murillo-Rohde has been influential in nursing and health care. She was a nurse, professor, and administrator with extensive knowledge of psychotherapy, marriage and family relationships, and cultural diversity. She also served as a UNICEF representative and WHO psychiatric consultant.

In 1975, Dr. Ildaura Murillo-Rohde was awarded her Ph.D. from New York University and became the first clinical guardian of Hispanic descent. She envisioned a more representative healthcare environment and wanted to help Hispanic women obtain their nursing degrees. She began her career in nursing in San Antonio, Texas, and later earned her Master of Science and Doctorate from New York University.

Despite Latinos’ challenges in the United States, Dr. Ildaura Murillo-Rohde was an inspiration and a pioneer in nursing. Her contributions to nursing research, scholarship, and education are unparalleled. The NAHN Education Excellence Award honors exemplary nursing education, practice, and scholarship contributions. It is also important to note that Dr. Ildaura Murillo-Rohde was born in Panama. She never possessed a Facebook or Twitter account and spent her time helping others.

The Case of Skylar Neese and Sheilse Eddy

How to Use the Azure Admin Portal